Olympic Climbing is Happening for the First Time Ever

In April of 2020, about a month into the reality of a worldwide pandemic and the possibility of a postponed Olympic games, CEC High Performance Director Andrew Wilson said to newly minted Olympians Alannah Yip and Sean McColl “I’m going to give you the final word and the gospel from the Canadian Olympic Committee. We’re not going to pay attention to anything else until the Olympic Committee confirms the message”. A coach’s job is many things but now having to manage expectations and sit with a calendar where days and months were a blur of uncertainty beyond basically anyone’s control? This was new territory.

Wilson’s move that April was a powerful one ensuring his athletes that it was full gas unless they heard otherwise. “They have to trust me and they have to trust their training,” he said. “What hurt was that when it was all a bit settled, we had to build a ½ year training plan beginning in November of 2020.”

This page will give you some insight to Andrew, Alannah and Sean’s experience ahead and what sort of things may be a little different. You’ll get some quotes from Andrew and hopefully some perspective for a rather monumental first for Canada, the Olympics and let us not forget a seriously weird past 18 months. 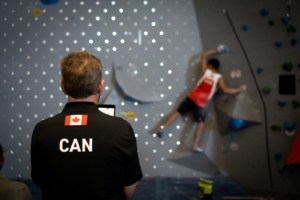 “A smaller group is great; less logistics to manage and I’ve known them both for so many years. It’s too bad they won’t have their families and friends close but we’re each other’s family on this trip”. -AW 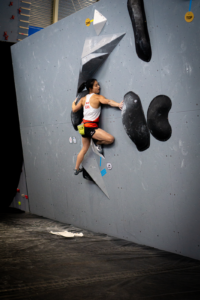 CEC will have a Canadian Olympic Committee (COC) Media Attaché on site that will takeover our Instagram and Facebook accounts for the duration of the games. Follow the action live through #CANclimbOlympics

“It’ll be a whirlwind; faster than we thought! Not being able to be there for opening or closing ceremonies is kind of a bummer. We still get a nice patriotic outfit and package from Hudson’s Bay Company on the 28th; there are very strict rules on what we can wear and when!” -AW 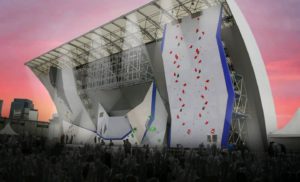 The Combined Format will be used at the Olympics.

Speed climbing will be contested on an IFSC-standard 15-meter speed wall. The bouldering wall will be four meters in height, and the lead wall will be 15 meters high. Completing them in that order, a climber will be shuttling between the wall and isolation, nothing new for Sean and Alannah (or anyone competing for that matter, except maybe South Africa).

Climbers may wear whatever hardware they want (i.e. no rules about chalk). The Olympians’ uniforms have been designed, and are provided, by Arc’teryx through CEC’s four-year partnership with the apparel company. The uniform includes the harness and chalk bag.

“Training at the Richmond Oval doing simulations has been great. Between what Sean procured through sponsorships and what the Oval has, we basically have the entire catalog of holds they may encounter at the games. We’ve relied heavily on Simon Parton and his experience for setting and Victoria resident Paul Ledet for his experience as a judge.” AW 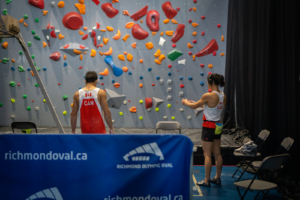 Each athlete’s overall standing will be determined by multiplying their ranking in each discipline, lower number’ rankings (i.e. 1, 2, 3) are best. Hypothetically, if a competitor places third in speed climbing, first in bouldering, and fifth in lead climbing, that competitor’s final combined score would be 15 (3x1x5). If another competitor placed second in speed climbing, second in bouldering, and third in lead climbing, that competitor’s final score would be 12 (2x2x3) and thus win over the previous climber—12 being a lower score than 15.

Here is what the Olympians will go through on each competition day (once for Qualifier, once for Finals).

ALL OF THE ABOVE IN ONE DAY! JUST ONE DAY!

“We’re hitting a level with Sean and Alannah that feels pretty good. We do a lot of debriefing, lots of talk about energy levels, managing room noise and even throwing some curveballs. By manipulating some scoring possibilities, we can even do some emotional simulations (if you slip on your first speed attempt or your opponent slips etc..).

The tactical and mental prep in the last month before an event has more impact on your ability than the physical elements. Sean and Alannah understand tapering and ramping up the mental game. For the day of, they know not to go nuts with the food spread in ISO or to have too much coffee or something silly like that. They’re both world class and have taken the time to research every part of their training.” AW 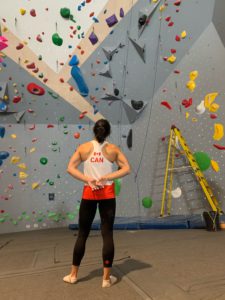 As Canadians, Sean and Alannah haven’t been able to do a lot of World Cup trips in preparation. Sean did Salt Lake City in May of 2021 but it’s only because he knew coming back into Canada, he could quarantine at home where he had built a wall and his training wouldn’t be interrupted. The wall he built within a month of the pandemic’s start is covered from the elements, is 12 feet high, 15-20 feet width and around 30 degrees at some points. Something he also did was contact the holds manufacturing companies from the Olympic sport climbing catalog and asked for sponsorship so he could train on the actual holds he needed. The man knows how to prep!

Alannah did not travel to Salt Lake and opted to stay in Canada for her preparations (she doesn’t have a home wall and some vaccine logistics at the time made this a complicated travel plan). She trains with Andrew 3x per week and always stays in close touch about her training (even slips out to Squamish to throw down).

The two of them are active social media users but also speak to Andrew about the potential pitfalls and distractions. As Andrew has said, they’re world class and at this point, the mental focus for them is paramount.

On August 3rd and 4th, Sean and Alannah will put on their shoes one at a time just like you and me, use a chalk of their choice and ascend into history as Canada’s first Olympic climbers. Be sure to tune in – strong coffee in hand (remember, 13hrs ahead of us!), force your young ones to watch and take notes as they’ll need to recount the moments for generations. The scoring setup and format promises some serious drama too; it’ll be very exciting! 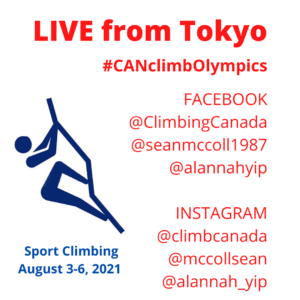 CEC is so very excited to welcome Veronica Joy Sweeney to the CEC Team! Veronica will fill the position of CEC Sport Development Coordinator, which includes management of all CEC domestic events, as well as program development such as safe sport, diversity, coaching, routesetting, and official resources.